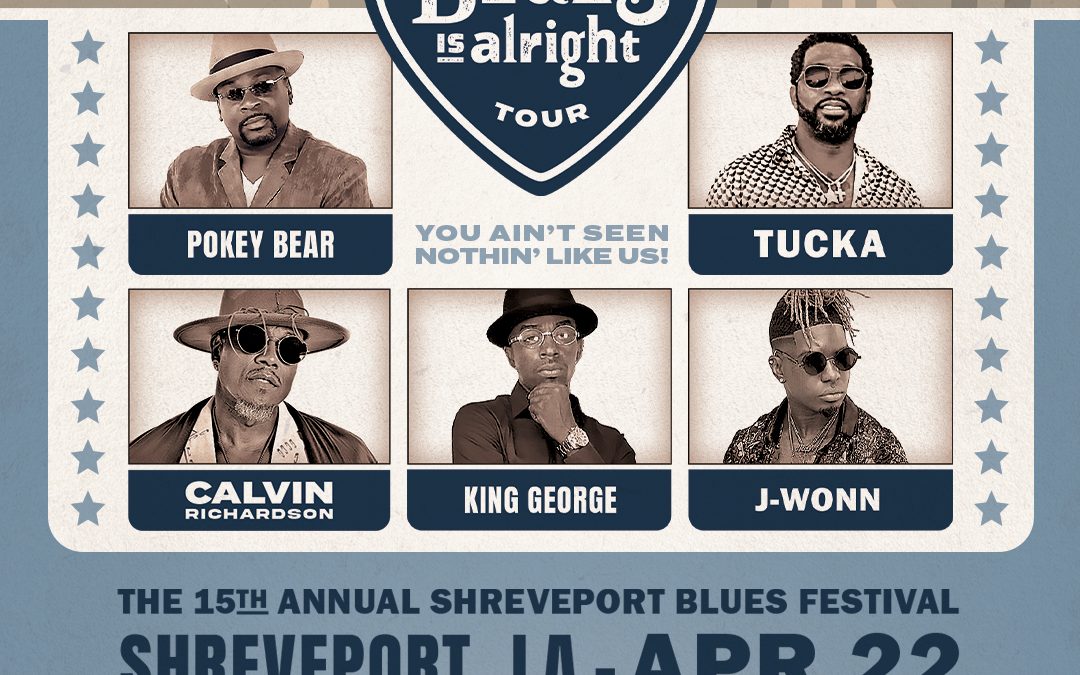 SHREVEPORT, LA (Sept. 12, 2022) – You ain’t seen nothing like them! The 2023 Blues Is Alright Tour is returning to Municipal Auditorium on April 22 for the 15th Annual Shreveport Blues Festival. Featuring performances by Blues legends Calvin Richardson, Pokey Bear, King George, J-Wonn, Tucka. Tickets go on sale 10 a.m. on Sept. 16 at Ticketmaster.com.

The 15th Annual Shreveport Blues Festival and the Blues Is Alright Tour is presented by North American Entertainment Group Inc., one of the leading independent promoters of entertainment tours and live events in the United States.

Wardell “Pokey Bear” Brown was born on February 2, 1970 in Baton Rouge, Louisiana. He is known for his soulful sound of music in the Blues/Southern Soul genre; however he did not start out that way. Pokey Bear began his career as a rap music artist, but after doing it for a while decided to try other styles. His venture off into other styles of music would lead him to be the soulful singer that he is today. He was first recognized in music for his first two projects produced by Beat Flippa. Particularly his songs entitled “They Call me Pokey” and “Side Piece,” The song “Side Piece” happened as a result of a hook that was written by Heavy in which he asked Pokey to write lyrics to. He has worked with artists such as Tyree Neal, Adrian Bagher, Ms. Pat, Veronica Raelle, and Cupid.

Born and raised in Monroe, North Carolina, Calvin Richardson is the fifth of nine children and the son of a Gospel singer. His life as a performer goes back to childhood: as a kid, Calvin’s mother led a Gospel act called The Willing Wonders and Calvin was the group’s youngest member. His first solo album, Country Boy, was released in 1999 by Universal Records and featured the singles “True Love” (featuring Chico DeBarge) and “I’ll Take Her” (featuring K-Ci Hailey). After being dropped by Universal, Calvin eventually rebounded and landed another record deal, this time with Hollywood Records. In September 2003, he released his second album, 2:35 PM. The album, which was named after the time that his son Souljah was born, featured the Grammy-nominated hit “More Than A Woman,” featuring Angie Stone. Other singles from the album were “You’ve Got Me High” (featuring Slum Village) and “Keep On Pushin’.” Most recently, Calvin signed with Shanachie Records. His first Shanachie album, When Love Comes came out May 27, 2008. It was followed by the Grammy-nominated Bobby Womack tribute album Facts of Life in 2009 and an all-new album, America’s Most Wanted, in 2010.

Tucka James is a songwriter and amazing artist. He’s in a lane of his own coming out of New Iberia, LA. Tucka James hit the scene in 2010 and never looked back. The ladies love his swag and style. Along with the charming voice. Tucka James has set standards that have never been set, he has performed in many states and cities. He has a unique flavor of music. You can never get enough of his hits such as “Candyland,” “Don’t Make Me Beg,” “Country Road,” “Sweet Shop,” “Booty Roll,” and so many more. He has collaborated with many other artists. They don’t call him Tucka for nothing. He’s a force to be reckoned with. There’s no stopping Tucka James.

Enthralling R&B vocals, feel good transitions, combined with a classic old school swag, effortless in his delivery and sincere in his approach, there is only one King George. The artist who is based out of Hopkin, SC. is currently preparing for the release of his highly anticipated album, Juke joint 2. He has been on the rise and is gaining significant momentum with each and every release and has displayed a vast amount of versatility in his music. Party vibes are all around when King George is playing on your speakers, his tone is rich and smooth glazed with his signature soothing accent. Lyrically his style is incredibly mature and always classy. Backed with incredible top-level production, King George’s releases are always to an impeccably high standard.  King George is without a doubt a fast-rising artist, growing leaps and bounds with every release. The future certainly looks incredibly bright.

​Jawonn Smith, better known by his stage name J-Wonn, is a soul singer that hails from Jackson, MS and has built a name for himself following the release of his hit single “I Got This Record”. His love of Blues came from growing up around his mother and grandmother, who would often sing around the house. At the age of 13, J-Wonn began writing music of his own and went on to write for many Blues and Soul singers. One of his proudest writing credits came from penning a track for the legendary soul artist Lenny Williams. During high school, he was a member of a hip hop group that also included elements of R&B. The group gained an artist development deal and it helped Smith to learn a lot about navigating the music industry. It also gave him an opportunity to grow as an artist. J-Wonn’s latest single entitled “Move On” is available on all digital & video platforms.” J-Wonn followed up “I Got This Record” with several other hits that were in continuous rotation on Southern Soul radio stations across the Southeast region. He has also won several awards from various outlets including Best Entertainer, Artist Of The Year, and Best New Single. He finished working on his second full-length album The Legacy which had led to collaborations with a wide range of different artists and an expansion of his brand of J-Wonn’s world to new ears. His latest single entitled “Move On” is doing great J-Wonn also released the video on his VEVO channel.